Following the comprehensive Video KYC FAQ, here is a quick summary of how to deploy the Video KYC solution into your client onboarding flow to remain compliant with the steps specified by the regulator. The Video KYC process can be split into three pillars (Before, During and After) taken from the V-CIP process defined in the master KYC circular published by RBI on 09 January 2020. 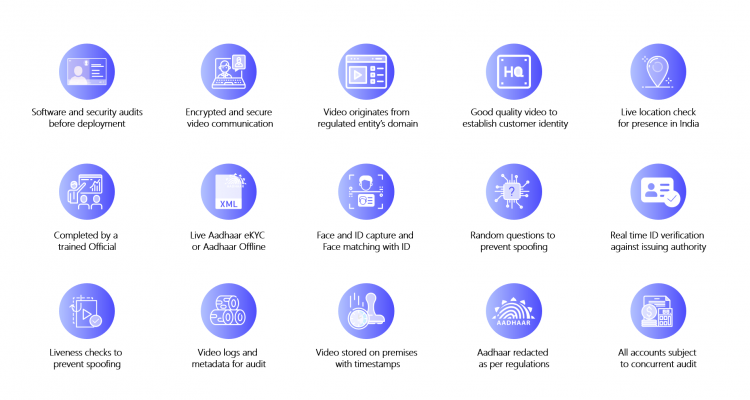 The first pillar of the process (Before Video KYC) is to ensure that the steps conform to the V-CIP regulations and complies with the broader KYC/AML facets of customer onboarding. To this end, the regulator has provided the following guidelines.

The second pillar of the process (During Video KYC) to ensure that the regulated entity follows all of the compliance processes set out by the regulator during the V-CIP.

The third pillar of the process (After Video KYC) is the safeguards and audit checks that the regulated entities must carry out to ensure that the video call passes concurrent audit checks as laid down by the regulator.

The bank official ensures that sufficient liveness checks are carried out to ensure that the person completing the steps and the video kyc is real and establishes the identity of the customer beyond doubt. The regulator encourages sufficient use of technology alongside human intelligence to ensure that fraudulent transactions are prevented and that controls are stronger for the official completing video kyc.

Talk to an expert today >

We are your friends at frslabs

Built for you, not for investors

We do what is right for you (and only you) at scale. Nothing is off-limits for us when it comes to innovation, a culture best reflected in the array of patents we have filed. We want to be your trusted partner, to build the solutions you need, and to succeed when you succeed.

We are driven by our mission to touch a billion lives with our tools and not beholden by venture capital or mindless competition. We therefore have the freedom to do the right thing, and price our products sensibly, keeping your success and our staff in mind.

Whatever it takes, we are here to help you succeed with our products and services. For a start, you get to talk to a human for help, not bots, to figure things out one-to-one. Whatever your needs, however trivial or complex it may seem, we have you covered.